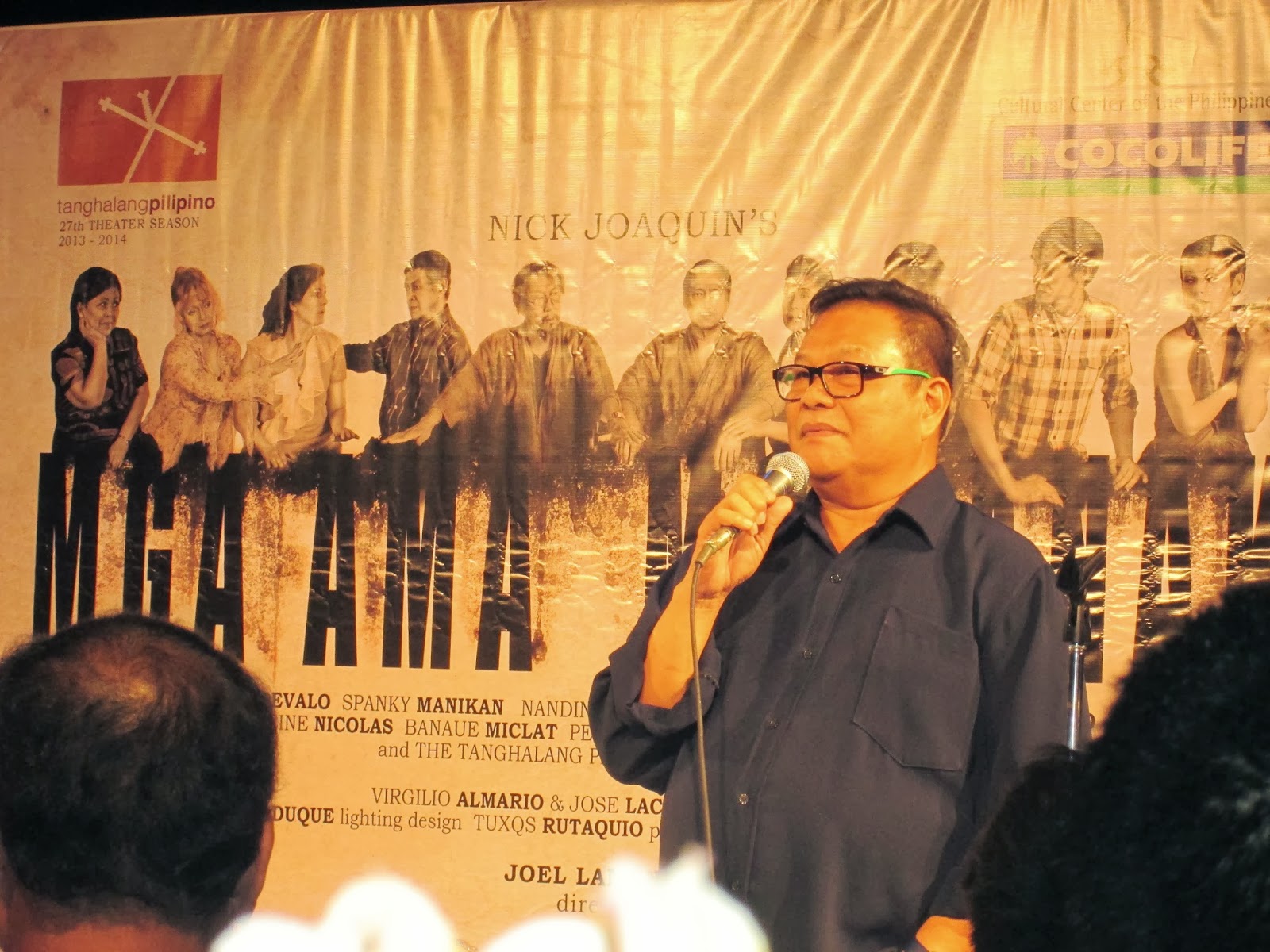 Tanghalang Pilipino, the resident theater company of the Cultural Center of the Philippines presents its final  offering for its 27th Theater Season, opening at the Tanghalang Aurelio Tolentino (CCP Little Theater) this February 21st. “Mga Ama, Mga Anak,” written by National Artist for Literature Nick Joaquin based on his short story “Three Generations”, and translated by National Artist Virgilio Almario and Jose “Pete” Lacaba, Jr., into Pilipino from his original English play “Fathers And Sons”, is a poignant drama in three acts. 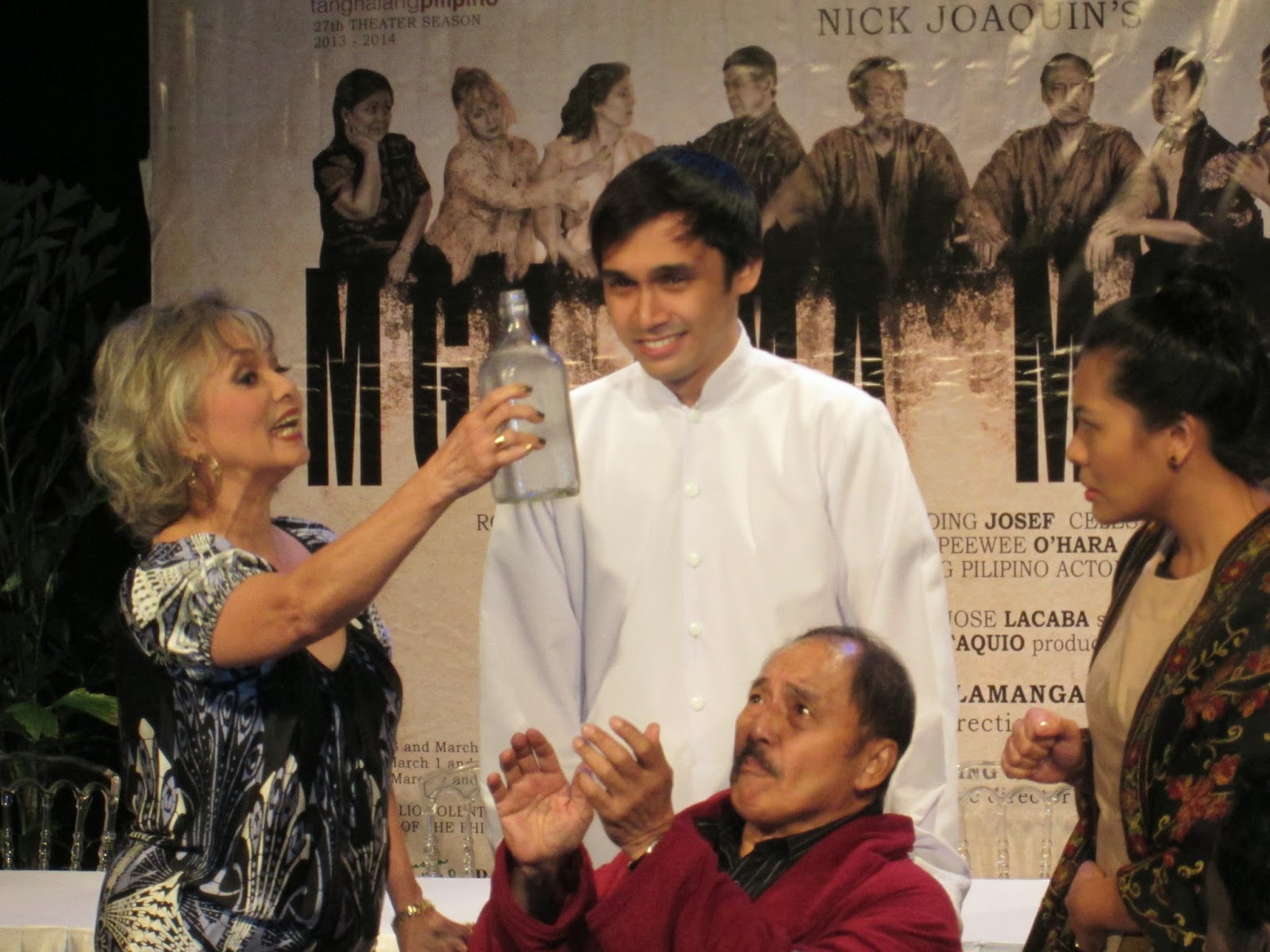 Featuring TV, Film and Stage luminaries Robert Arevalo and Spanky Manikan, alternate as Zacarias Monzon, Celeste Legaspi and Jackie Lou Blanco, alternate as Sofia Monzon, and young actress Cris Villonco (Bessie). The story revolves around a former town ilustrado and Caretela king Zacarias Monzon, his fall from power and wealth, and his gnawing conflicts with his son and his family. Cruelty, hedonism, disloyalty, and suffering marred his past. Now, so close to death, Zacarias still has the reins over his resentful son, his confused grandson, and a benevolent martyr of a mistress, until they decide it was time to cut loose and be responsible for what they are and what they will be. Award-winning director and stage actor Joel Lamangan directs this production for Tanghalang Pilipino. 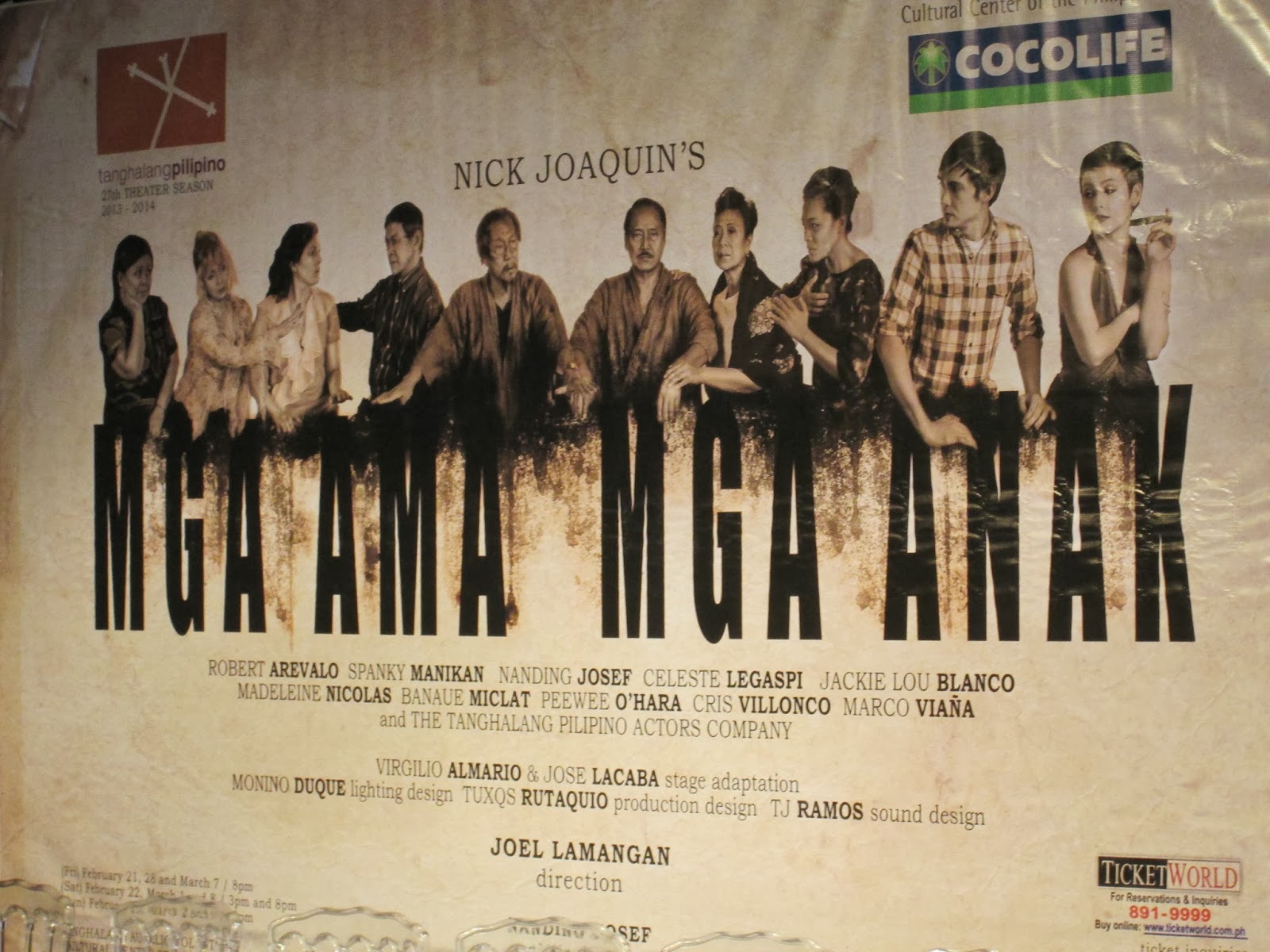 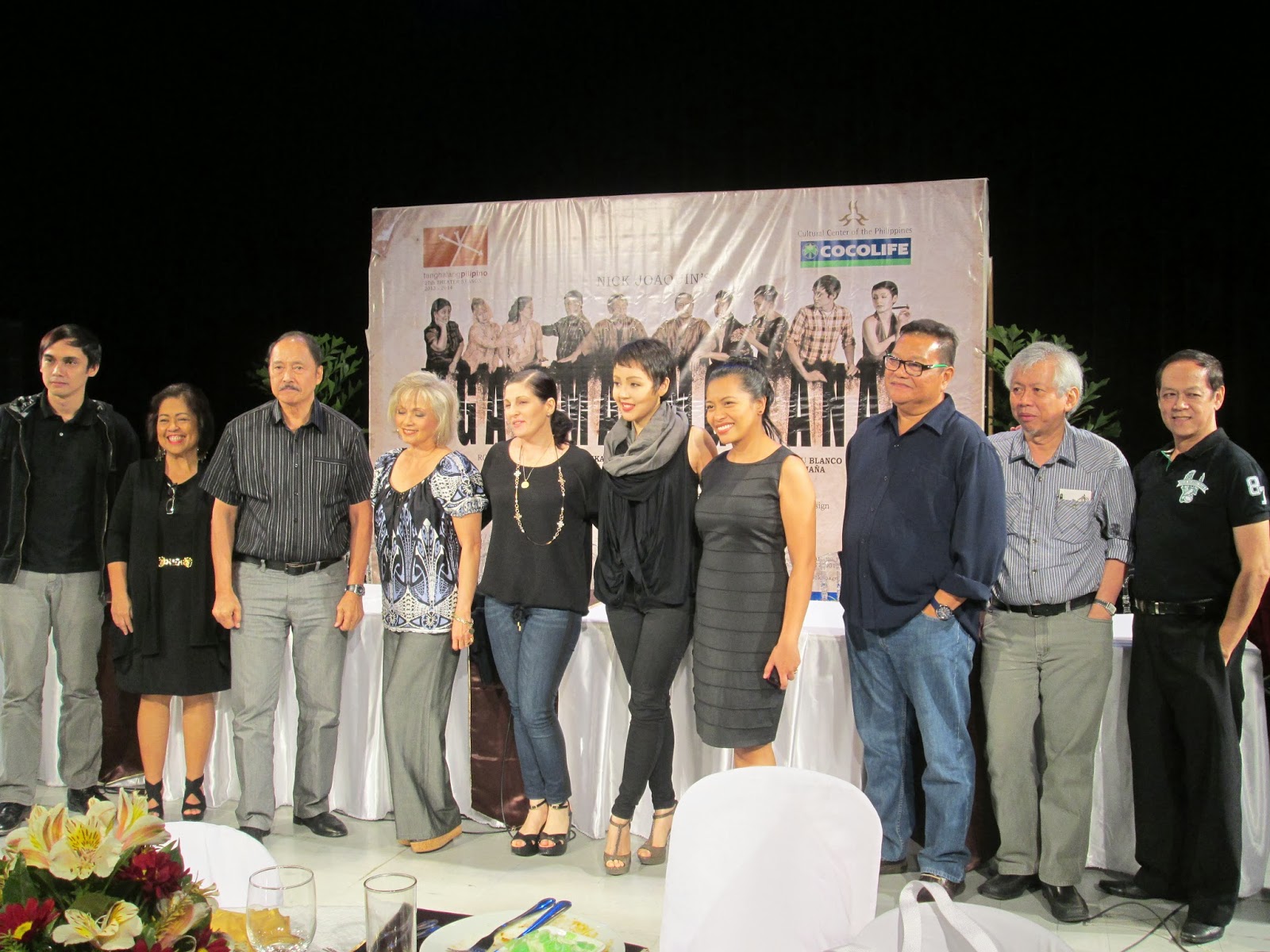 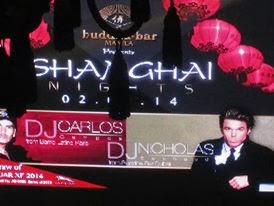 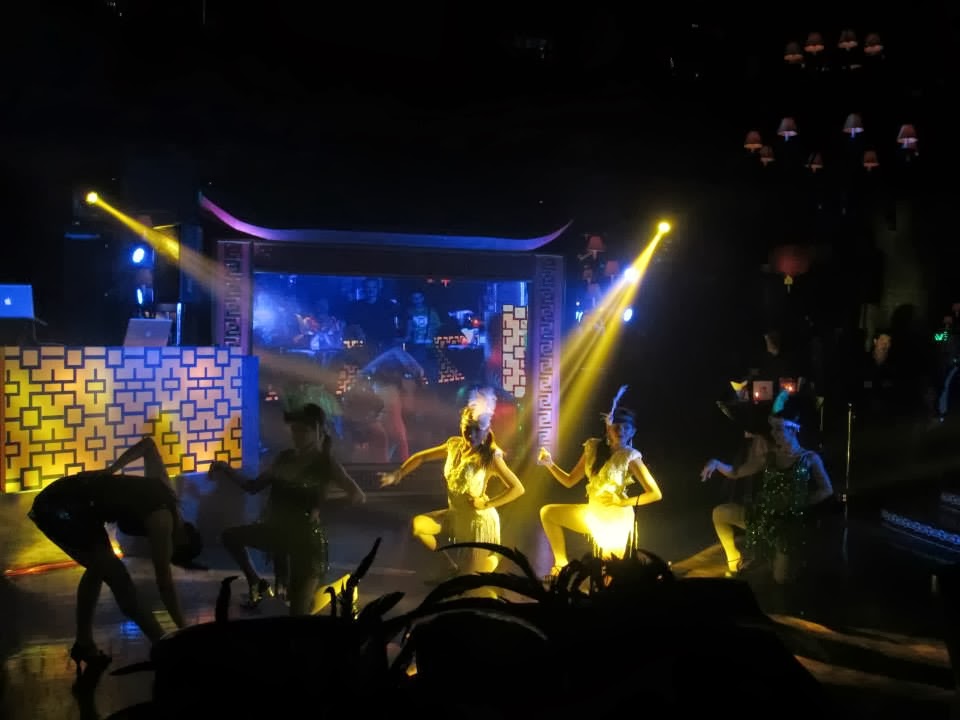 Welcoming the guests are the ever gregarious Buddha-Bar Manila staff who have been committed to world-class service for Manila patrons since 2012, along with excellent quality champagne, and a party experience that is definitely one for the books. Buddha-Bar Manila has been known for its sumptuous Pacific Rim
menus and cocktail treats that made the anniversary celebration more than complete.
Adding to the ecstatic anniversary feels, Buddha-Bar Manila flies in party DJ icons, DJ Nicolas Sechaud and DJ Carlos Campos. DJ Sechaud, Buddha-Bar Dubai’s resident DJ, is known in party circles as the Sunset Master who had played in premiere party destinations like Ibiza, Brazil, Germany, Italy, and luxurious fashion events of Versace and Gucci. Alongside DJ Sechaud, is Barrio Latino Paris DJ, DJ Carlos Campos. DJ Campos is considered a legend in party music mixing and has produced various tracks in the hit signature Buddha-Bar music compilation. A trip around the world through soothing music, the Buddha-Bar Manila 2nd Year Anniversary is a celebration of its signature music influx in the Philippine party scene.
And the perfect cherry on top of Buddha-Bar Manila’s 2nd Year Anniversary is the grand draw of the lucky winner in the Drink.Dine.Drive promo. Launched in July 2013, the much anticipated contest has enticed many guests to try their luck and February 1, only one gets to drive home the brand new Jaguar XF 2014.
A fabulous 2nd Year Anniversary that coincides with the end of the biggest Buddha-Bar Manila contest ever, the Drink.Dine.Drive promo, Buddha-Bar Manila continuously offers hip treats to diners, party goers, and denizens of the city; the meticulously prepared Business Lunch  that is available everyday, Industry Nights on Monday and the fun Ladies’ Night every Wednesday, plus so many exciting new happenings to look forward to.
Buddha-Bar Manila 2nd Year Anniversary is another milestone to remember how Manila party scene endlessly evolves. With its strong presence and remarkable trend setting, Buddha-Bar Manila shifts dining and partying to a more posh, more stylish, and more glamorous level; best for the best!