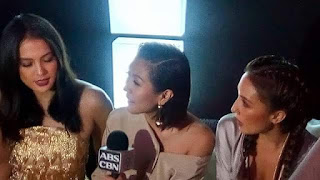 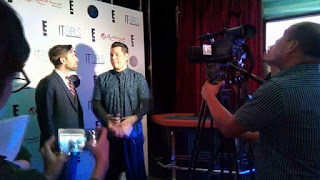 Georgina Wilson, Solenn Heussaff, Isabelle Daza and Liz Uy take #SquadGoals to the next level when IT GIRLS debuts on Oct 24, Mondays @ 8pm on E! #ItGirlsOnE

MANILA, 18 October - IT GIRLS, which critics are calling Sex and the City, Launch Party @ House Manila done with flare, four celebrity BFFs who are at the top of their game: Georgina Wilson ( former Asia's Next Top Model Host ), Solenn Heussaff ( French Filipina actress/artist ), Isabelle Daza ( daughter of Miss Universr 1969 ) and Liz Uy ( celebrity stylist ). For the first time, the fabulous four give fans an all - access look into their lives in the exclusive upper echelons of the Philippines sensational showbiz scene.

" Between them, the IT GIRLS have an outstanding 17 million social media followers, With this series, those fans will get to see what they are really like outside of their glamorous celebrity personas. This is a unique experience that only a pop culture powerhouse likr E! can bring " said Scott Mackenzie, Vice President, Channels, Asia, NBC Universal International Networks and the series' executive producer, " With the ratings success of It Takes GUTZ to be a Gutierrez in markets like Singapore and Malaysia, we are confident that IT GIRLS will fascinate viewers across the region. "

Directed by Raymond Gutierrez, E! News Asia host and star of E!'s It Takes GUTZ To Be A Gutierrez, each episode of IT GIRLS follows the crazy and colorful lives of the squad, rotating between their different roles as public personalities and switching modes into their more personal lives as wives, sisters and daughters. Drama abounds as the pressures of being a celebrity heighten and the ultimate question is - what will these IT GIRLS compromise between life changes and their showbiz life? Will each prioritize things at home or keep up with the ever evolving demands of their careers? Can an IT GIRL truly have it all?
Ipinaskil ni Pilipinas online sa 12:21 AM