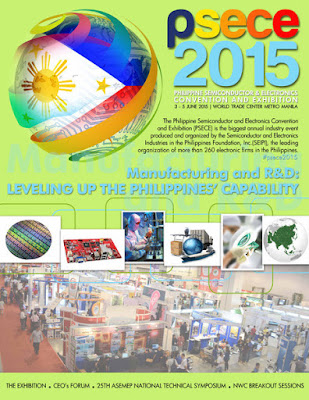 The Philippine Semiconductor & Electronics Convention and Exhibition (PSECE) is an annual event with over 150 exhibiting companies whose products and services range from semiconductor, computer related products, consumer electronics, automotive electronics, photovoltaic/solar, telecommunications, control and instrumentation, industrial, and other support industries such as fabrication, tooling, equipment, utilities, and more.

This will be held on June 3-5,2015 at the World Trade Center, Manila, Philippines.


The Philippine Semiconductor and Electronics Convention and Exhibition (PSECE) is the biggest annual convention and exhibition of the leading technology companies in the Philippines. The exhibition component features the complete range of the electronics industry, from chips to finish products, from suppliers/service providers to manufacturers to retailers and distributors.

It all began in the 1970s when multinationals from the industrialized nations in the west set up their assembly plants in the country. Companies from the Asian region followed suit as conditions that encouraged electronics investments remained and have been further enhanced by a stable and democratic political structure. With the establishment of Filipino firms and multinationals providing a competitive balance in the business, the industry’s position as a vital and growing high-technology sector has been stamped. From a business that started out with the simplest type of chip packaging, the industry assembles and tests the most sophisticated electronics products and components available in the global market. Buoyed by the availability of skilled, cost-competitive and English-speaking technical workforce, electronics corporations have found the site for the manufacture of products such as the Anti-lock Brake System (ABS), advanced microprocessors, CD-ROM drives, digital signal processing units, Printed Circuit Boards (PCBs), disk drives and computers in the Philippines.

As a potent industrial and economic force playing a major role in Philippine national development, the different semiconductor and electronics companies formed on October 24, 1984 what is known as the Semiconductor Electronics Industry Foundation, Inc. (SEIFI). Thirteen (13) executives from local and foreign semiconductor companies bonded together to represent and promote the interests of the industry.

The association was formed to comply with one of the provisions of an Executive Order known as the Corporate Farming Program of then President Marcos. Instead of applying the Program to produce rice and corn for their employees, the thirteen companies took advantage of a provision that allowed the conduct of specific in-company training for their personnel and the financing of industry-wide training programs for engineers and technicians of the semiconductor and electronics industry. The Securities and Exchange Commission (SEC) accredited the incorporation of SEIFI as a non-stock, non-profit organization on October 30, 1984. As envisioned, SEIFI was chartered “to conduct, promote and undertake technical training to meet the needs of the industry and accelerate the transfer of technology to Philippine workers.”

On February 16, 1987, its by-laws were amended to include the rendition of community service by SEIFI, making it not only a “training driven” association but one that represents and promotes the interest of its member in their interaction with the government, media and other sectors of the business community. The foundation also assists members in the solution of diverse problems encountered in their daily operations, such as advice on pollution control measures, safety procedures and financial complexities, among others. 

Cordiality, cooperation and willingness to serve have always pervaded the workings of the board. This is one of the reasons why SEIFI has grown into a successful industry association which has gained the respect and confidence of its growing members.

The association, in September 1998, changed its name from the Semiconductor Electronics Industry Foundation, Inc. (SEIFI) to Semiconductor and Electronics Industries in the Philippines, Inc. (SEIPI) to realize its goal of being the representative body of the major players and all industries supporting the development of Philippine electronics. With this change, SEIPI has adopted the clustering framework as a key strategy for industrial development.

The year after, Malacañang Palace, under the term of former President Joseph E. Estrada, released Proclamation Number 184 declaring every last week of October as the “Philippine Electronics Industry Week”. Added to that, every October 29 would be the “Foundation Anniversary of the Semiconductor and Electronics Industries in the Philippines, Inc. (SEIPI)” where people in the industry were given an opportunity to celebrate the occasion with appropriate ceremonies.

The association’s clustering of electronics industry movers has enabled it to fully extend support to the Philippine Export Development Plan (PEDP). This could not have come at a better time as the semiconductor and electronics industry has emerged as the country’s premier generator of jobs, exports, investments and technology transfer.

SEIPI has embraced its vital and increasing role in the country’s export structure. Keeping this in mind, it now leads the way in enhancing the competitive environment for electronics business, driving the Philippines toward the global leadership in the field of Information and Communication Technology.