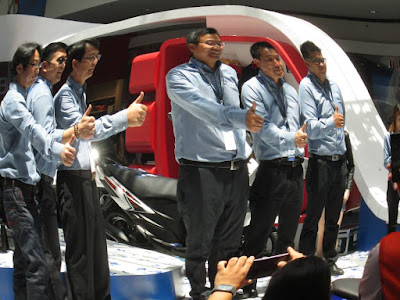 SM MALL OF ASIA, PASAY CITY, JUNE 4-7, 2015 — Yamaha Motor Philippines, Inc. has set its sights to redefine the landscape of the motor industry with breakthrough technology that will challenge the limits of riding lifestyle. The event is centered on Yamaha’s next-generation engine, The Blue Core. This will bring about a new level of riding enjoyment that will take over the country; a fusion of maximum performance and fuel economy enabling a superior ride will now be available in the country.
The introduction of this engine is just the start of a new era for the company with a series of products featuring the Blue Core in town, commuters, racers and hobbyists will have plenty to choose from. 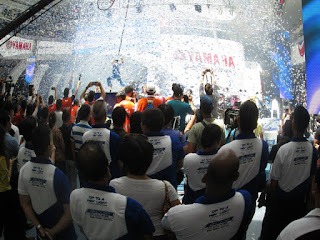 First would be a pair of 125 units, one is the Mio i 125 with its unique “M” shape inspired design gives a sharply defined slim body that complements its lightness and convenient handling. It will allow you to reinvent yourself by elevating your daily ride into a more exciting and more colorful by making you do more than ever before. The other is a trailblazing concept that will establish a daunting presence, the Mio Soul i 125. It has a bold design that is intimidating on the road, giving the rider a more confident demeanor on the road. For fans of the MAX series, they were delighted to know about the unveiling of the N-MAX that is built to give great ease, comfort, and power. All three would feature the Blue Core engine.


Last but not the least would be another member of the R-Series. With the recent launch of the YZF-R15 in country, the high velocity lifestyle has hit an all time high. Now, an everyday super sport bike has arrived in the form of the YZF-R3 making any road just like the race tracks.
Also featured is the Big Bike category which will become available later in the year. The Yamaha Tricity, a marvel that features 2 front wheels that adjusts independently to road conditions, The R-Series with the YZF-R1, and YZF-R15. The Marine category also made a splash with the Wave Runner and outboard motors, and Power products, generators that will give you the power of tomorrow, today.
There are also fun activities for everyone such as the photo booth and the motorcycle selfie where guests who have the best photos received freebies. On June 7, it was a chance for Yamaha Club members to exclusively test ride the new Mio i 125.
This is the start of a new era, with ingenuity that inspires an upgraded lifestyle. Passion has reached a new level and Yamaha will take you there.
Ipinaskil ni Pilipinas online sa 11:27 PM