SPOTLIGHT The true story behind the scandal that shook the world 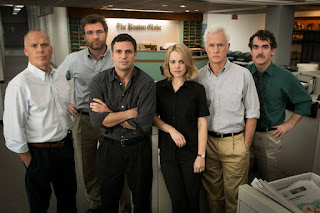 SPOTLIGHT The true story behind the
scandal that shook the world.

SYNOPSIS
SPOTLIGHT tells the riveting true story of the Pulitzer Prize-winning Boston Globe investigation that would rock the city and cause a crisis in one of the world’s oldest and most trusted institutions. When the newspaper’s tenacious “Spotlight” team of reporters delves into allegations of abuse in the Catholic Church, their year-long investigation uncovers a decades-long cover-up at the highest levels of Boston's religious, legal, and government establishment, touching off a wave of revelations around the world. Directed by Academy Award-nominee Tom McCarthy, SPOTLIGHT is a tense investigative dramatic-thriller, tracing the steps to one of the biggest cover-ups in modern times.
SYNOPSIS 2 (189 characters w/ spaces)
The true story of how the Boston Globe uncovered the massive scandal of child molestation and cover-up within the local Catholic Archdiocese, shaking the entire Catholic Church to its core.

MTRCB Rating: R16 (Children below 16 years of age must be accompanied by an adult)
Running Time: 2 hours and 7 minutes
Released by: Solar Pictures