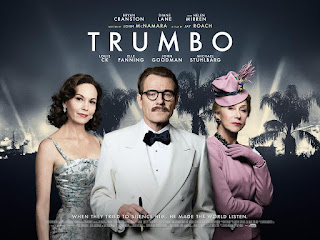 Manila, Philippines -- "When they tried to silence him, he made the world listen." At the height of Cold War paranoia, Hollywood’s greatest screenwriter, Dalton Trumbo, was blacklisted. Refusing to sacrifice his principles or submit to a system gripped by paranoia, Trumbo fought for his right to a voice. This is his inspirational true story.

From Solar Pictures, comes a must see movie that will make you see Hollywood in a different perspective.A story about a man who risked everything to keep his family together. In 1947, Dalton Trumbo (Bryan Cranston) was Hollywood’s top screenwriter until he and other artists were jailed and blacklisted for their political beliefs. TRUMBO (directed by Jay Roach) recounts how Dalton used words and wit to win two Academy Awards and expose the absurdity and injustice of the blacklist, which entangled everyone from gossip columnist Hedda Hopper (Helen Mirren) to John Wayne, Kirk Douglas and Otto Preminger. The film also stars Diane Lane, John Goodman, Louis C.K., Elle Fanning, and Michael Stuhlbarg.

TRUMBO will be showing in theaters this coming March 16, 2016. for more information you can check out the trailer here.
Ipinaskil ni Pilipinas online sa 10:34 PM