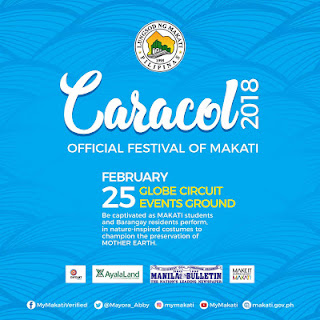 A Festivity for Mother Nature....come and join this celebration for a worthy cause. Be counted and at the same time, learn and enjoy!

Makati Mayor Abby Binay urged the public to come and take part in the revelry which highlights the beauty of nature and the importance of conserving and protecting our natural resources.

Caracol, now on its 32nd year, is a significant annual event for Makati. It serves as a constant reminder to our people, especially the young ones, that despite our highly urbanized landscape, we must strive to take care of the environment because our lives and our future depend on it.

The mayor emphasized that even as the city government has resolved to embrace technology and has taken major steps towards a “digital Makati”, it remains firmly grounded on its commitment to remain at the forefront of global efforts to promote sustainable and highly resilient communities.

Caracol Festival is not a mere display of merriment, but an effective tool to heighten public awareness on the urgency of getting our acts together to heal the earth, and to motivate residents and visitors alike into taking an active role in building a healthy and sustainable environment.

A Spanish term for snail, Caracol alludes to the shell people use as shields to life’s harsh realities. During the festival, revelers are encouraged to discard their “shells” and join in the merrymaking and to rejoice in the bounty of Mother Earth.

Mayor Abby also thanked the city’s constant partners in the private sector through the years for consistently supporting the event, namely,Ayala Land, Circuit Makati, Manila Bulletin, and Make it Makati.

The MCAO has confirmed that the festival will start with a parade of participants, barangay officials and residents, city employees, private sector representatives, senior citizens, and students at 4pm, which will be followed by a dance competition.

This year’s highlight will be a dance competition wherein participants are expected to showcase a creative interpretation of different environmental issues.

Meanwhile, high school students from San Antonio National High School, Makati Science High School and Pitogo High School will perform either Waltz or ballet, clad in flower or insect-inspired costumes. On the other hand, there will be six groups of performers from the Barangays who will imitate marine lifewhile ballroom dancing.

Special awards will also be given away for Best in Costume and Best in Choreography, with a P50,000-cash prize for each award.

Contestants will be judged according toappearance, creativity in putting the spirit of the festival into performance, originality of design, and actual dance routine performance.

During the parade, judges will choose three winners for Best in Costume, with P50,000 cash prize for first place, P40,000 for second place, and P30,000 for third place.

A separate competition will also be held amongprofessional photographers who will successfully publish their best shots in print media. The Best Photo will win a cash prize of P25,000, while the first and second runners-up will receive P15,000 and P10,000, respectively.

The Caracol Festival is the official festival of Makati City. It is observed every last Sunday of February.

The original concept of the festival was the presentation of three major festivals of the country. In its first eight years, Metro Manila talent groups of Sinulog, Dinagyang and Ati-Atihan were staged in one major event competing for awards. In 1993, to support the global call for the preservation and conservation of our natural resources, a new theme was created and evolved into today’s festivity which mirrors the beauty and bounty of Mother Nature.
LABELS: AYALA LAND BEAUTY OF NATURE CARACOL CARACOL FESTIVAL 2018 CIRCUIT MAKATI GLOBE CIRCUIT MAKATI FESTIVAL
Ipinaskil ni Pilipinas online sa 8:57 PM