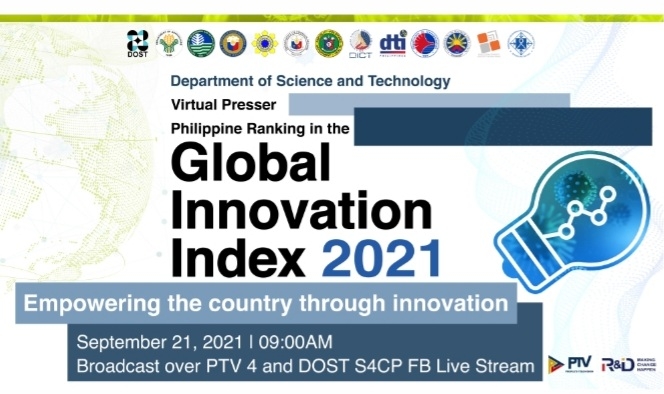 Despite challenges from the pandemic and decreasing budget for research and development (R&D), the Philippines claimed the 51st spot out of 132 economies in the Global Innovation Index (GII) 2021 report.  In an inter-agency virtual press conference held on September 21, 2021, the Philippines proved that it is an efficient innovator with its capacity to translate innovation investments into innovation outputs.

The Global Innovation Index (GII) is published yearly by the World Intellectual Property Organization (WIPO), a specialized agency of the United Nations. The Philippines’ 2021 GII score is a notch lower compared to its 2020 ranking.  However, the good innovation performance of the Philippines resulted in its inclusion to the list of five countries in the world that made significant progress in the GII over time, along with China, Turkey, Vietnam and India.

“The Philippines continues to lead by example to other developing countries in setting innovation as a national priority,” said WIPO Assistant Director General Marco Aleman. “The entry into force of the 2019 Philippine Innovation Act proposing the GII as a measurement and assessment tool of the innovation performance of the country is the clearest example of the Philippine government’s effort to foster innovation in the economy.”

“Now, more than ever, the Filipino people are looking up to science, technology and innovation for solutions to their problems,” said Department of Science and Technology (DOST) Secretary Fortunato T. dela Peña. “The demand drives the Department further to continuously support our researchers, scientists and engineers (RSEs), and the aspiring ones.”

In the GII 2021 report, the Philippines ranked 4th among the 34 lower middle-income group economies and 11th among the 17 economies in Southeast Asia, East Asia, and Oceania.  With roughly 80 indicators, the GII ranks the countries in the world with their innovation capabilities.

In the last three years, the innovation inputs or the investments for these activities in the Philippines remain low, with our ranking now at 72 compared to rank 70 in 2020 and rank 76 in 2019.  However, despite the low input, our ranking for innovation outputs or the resulting programs and technologies from such investments, is rising, with the Philippines at rank 40 in 2021, a step higher from the 41st ranking in 2020.

“Our country’s modest investments in R&D can only go so far,” related DOST Undersecretary for R&D Rowena Cristina L. Guevara. “As an initiative to sustain innovation efforts, the DOST is lobbying for the passage of the Science for Change (S4CP) Bill.  Approval of the said bill would mean the continuation of the inclusive, equitable and sustained efforts for innovation, given the optimal use of our resources for R&D.”