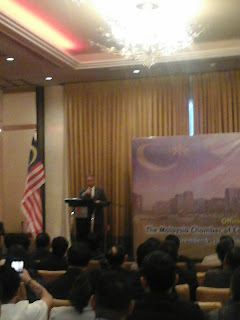 September 6, 2017 witnesses the official launch of The Malaysia Chamber of Commerce and Industries Philippines (MCCI )
by the Honorable Dato' Sri Mustapa Mohamed, Minister of International Trade & Industry of Malaysiam at The Marriot Hotel, Manila. What made it a significant affair is that MCCI is the first foreign chamber of a nation from South East Asia to be established in the Philippines.

MCCI is poised to be a potential conduit to help further boost the healthy trade between Malaysia and the Philippines which grew by almost 20% to US$2.9 billion in the first semester of the year compared to same period last year. Malaysia's total exports to the Philippines increased 12.7% to US$1.8 billion as of end June 2017 compared to the previous year while imports jumped 34.6% To US$1 billion during the same period.

MCCI President and Co-Founder Edward Ling mentioned that it was the perfect timing for the incorporation of MCCI to be carried out this year as it coincides with the Philippines being the host if this year's Association of Southeast Asian Nations ( ASEAN ) Summit.

He reported that MCCI will sign three MOUs with formidable industry partners during the official launch. MOUs will be signed with The Federation of Chinese Chamber of Commerce and Industries. The BangsaMoro Federal Business Council in Mindanao, and Business Network International ( BNI ) Philippines. He added, " We at MCCI believe that in order to achieve success in anything that we aim for, the key is to work in harmonious cooperation with various industry leaders, fellow Chamber counterparts and to constantly strive to achieve a win - win goal with all our partners. We believe that in sharing, whether through networking, expertise or ideas, we can move mountains," he said.

MCCI Vice President and Co-Founder Eric Yam explained, " We all felt that together we could really help extend and expand trade between the two countries since we are basically Malaysians based here in the Philippines for the long haul. And opportunities of trade between these two two nations are in abundance in almost every area one can think off such as ICT, construction, building materials, palm oil, FMCG, processed Halal food, biotech, and not forgetting the potential of technology transfers to be carried out."

The Ambassador of Malaysia to the Philippines of the Embassy of Malaysia, HE Dato' Raszlan Abdul Rashid is the Patron for the Chamber; while MCCI's Honorary Members are Exec. Chairman of Global Movement of Moderates Foundation Dato' Dr. Nasharudin Mat Isa, Chairman and President of Philtrust Bank Dr. Jaime C. Laya, President and CEO of First United Broadcasting Corp. Mr. Philip J. Chien, and Chairman of Wallace Business Forum Mr. Peter L. Wallace.

The Founding Board of Trusties for MCCI are Edward Ling ( President ), Eric Yam ( Vice President ), Azhar Mahmood  ( Treasurer ) and Alimatar "Àlli"  Garangan 11 ( Corporate Secretary ). It has under its fold, MATRADE Commissioner Nyaee Ayup as its Trade Advisor and Amir Faizal Ahmad as its Diplomatic and Protocol Advisor