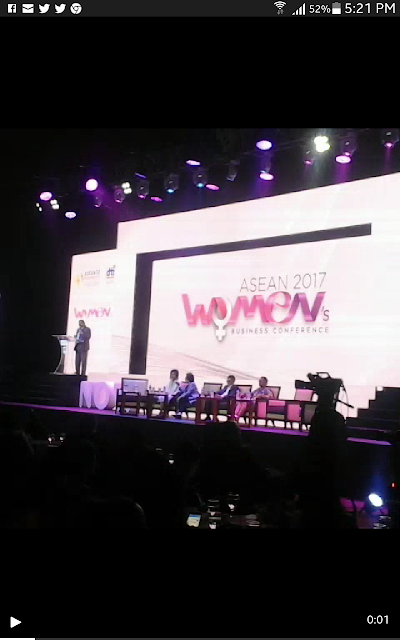 The Philippines continued its championship of women's economic empowerment with its staging of the ASEAN Women's Business Conference ( AWBC ) on August 31 at the Philippine International Convention Center, Pasay City.

In partnership with the ASEAN Women Entrepreneurs' Network ( AWEN ) and the Philippine Commission on Women ( PCW ), the Philippines' Department of Trade and Industry ( DTI ) gathered women business leaders and delegates from the public and private sector in ASEAN member states and its dialogue partners to put forward policies and initiatives that will enhance women's participation in business and innovation in the integrated ASEAN Economic Community.

Over 600 local and international delegates participated in the conference that featured seven panel discussions that tackled topics relevant to the economic empowerment of women including gender equality, inclusive business and innovation.

" The Philippines has made good on its commitment to the principle of gender equality as reflected in our institutions. With this Conference, we are calling for stronger policy support and more initiatives for the economic empowerment of women in the ASEAN region as it is integral in achieving an inclusive, innovation-led growth in the integrated regional community, "said DTI Undersecretary for Trade and Investments Promotion Nora k. Terrado who chairs the ASEAN Committee on Business and Investment Promotion.

For its part, the private sector-led AWEN holds that partnership between the public and private sector is key to achieving gender equality.

" AWEN, with its members, works closely with governments in identifying major barriers to women's economic participation particularly in addressing key issues such as limited access of women-led micro, small, and medium-sized enterprises to market, assets, and finance. Key programs with our partners are also in place in forwarding innovation and technology across the network, " said AWEN Chair Pacita Juan.

The AWBC, which capped a week long program of related events, put forward an action agenda for both public and private sectors entitled " Mainstreaming Women's Economic Empowerment in ASEAN."

The statement endorsed the outcome of the forum on " Women's Economic Empowerment: the Next Driver of ASEAN's Success" on August 29 that was co-hosted by Australia.

It also reaffirmed the commitment to eliminate widespread and entrenched disparities in women's access to economic opportunities and resources and ensure inclusive development that was elaborated in the forum " Mainstreaming ASEAN Women
in Trade and Goods and Services toward ASEAN Economic Community 2025 " that was sponsored by the United States on August 30.

The AWBC call to action also welcomed the Women ICT Frontier Initiative ( WIFI ), a capacity building program on information and communication technology ( ICT ) for women entrepreneurs of the Asian and Pacific Training Centre for ICT Development of the United Nations Economic and Social Commission for Asia and Pacific.