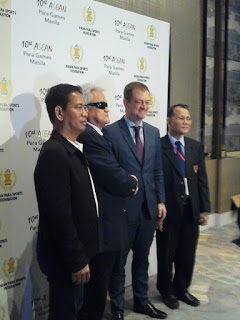 Michael I. Barredo was born in Manila on April 2, 1955. He graduated from the De La Salle University with a B.A. General Studies in 1975 and B.A Philosophy and Letters in 1999.
He figured in a vehicular accident that left him visually impaired in 1979 and began his involvement with the disabled sector soon after. Sports being an integral part of his life as a former athlete then into sports administration, it has been his lifelong passion to advocate the importance of ‘Sports for All” especially for those with a disability as it develops self-confidence, heightens self-esteem and strengthen ones competitive spirit.
He is the founding President of the National Paralympic Committee of the Philippines, former Chairman of International Blind Sports Federation (IBSA) Asia from 2002-2004, then became the IBSA World President from 2005-2013, former Commissioner of the Philippines Sports Commission (PSC), founding governing Board Member and Vice President of the Asian Paralympic Council and also a charter member of the Board of Governors of ASEAN Para Sports Federation (APSF). Currently, he is the President of Philippine Paralympic Committee(PPC)- NPC Philippines, Chairman of the APSF Board of Governors(BOG), member of the Asian Paralympic Committee (APC) Executive Board as representative for the South East Asia Sub Region.
In 2013, Barredo received the Victor Ludorum, “The Winner of the Games”, from IBSA and is a recipient of the“Paralympic Order” from International Paralympic Committee (IPC), which is the highest tribute given to individuals for their contribution in furthering the Paralympic Movement throughout the world.
The “Asian Order” was also awarded to Barredo last November 2016 during the General Assembly in Bangkok, Thailand.  It is the highest order that the Asian Paralympic Committee (APC) can bestow and is awarded to any person who has illustrated the APC ideals through his or her actions, has demonstrated outstanding achievement in their sport, or has given outstanding and long-lasting services to the APC cause.
Other Awards:
Outstanding Disabled in Business-1988
The Outstanding Young Men(TOYM) of the Philippines-1992
De La Salle University Sports Hall of Fame inductee- 2006