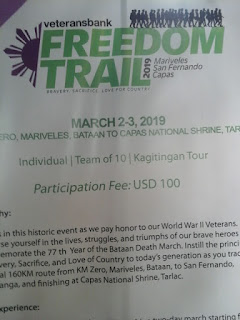 Aiming to hold the legacy of camaraderie, bravery and sacrifice made by Filipino and American freedom fighters 77 years ago, Philippine Veterans Bank (PVB) together with its partners, is once again holding the Freedom Trail (Mariveles-San Fernando-Capas) the actual route of the Bataan Death March in time for this year's commemoration of Philippine Veterans Week.

There will be three event categories in the Freedom Trail: the Freedom Trail is a two-day march starting from Km 0 in Mariveles, Bataan, covering the 140 km original route all way to Capas National Shrine in Tarlac. Participants may register as an individual or a group of ten (10) and the Marchers will relay the Freedom March Symbolic Guidon (flag). Another one is the Kagitingan Tour which is a 320 km two-day historical chartered bus tour where the participants will make stops at the designated WWII historical sites where a historian is assigned to each pit stop.

This is the third year of the Freedom Trail which will be held on March 2-3, 2019. On the other hand, the Ride for Valor will be held on March 10, 2019 and will see participants trace the entire route of the Bataan Death March in a unique Big Bike Competitive Tour, Ride and Seek Style from Kilometer Zero in Mariveles, Bataan all the way to Capas, Tarlac.

The third event is the Bataan Freedom Run (BFR), now on its 6th year, slated on April 14 (Sunday) invites running enthusiasts to follow the route of the historic Bataan Death March through the Province of Bataan beginning at Balanga Capitol up to Mt. Samat for the 42-kilometer full marathon, other features a 21-kilometers half-marathon, as well as 10-kilometers, 5-kilometers, and 1-kilometer courses for all types of runner from pro-runners to kids and pets.

This year's Freedom Trail aims to involve more participants from the youth, military and police and members of the US Special Forces will also be invited to join the solo and/or team relays.

"Philippine Veterans Bank and its partners are honored to again hold the Bataan Freedom Run and the Freedom Trail in time for the 77th Anniversary of the Bataan Death March and commemoration of Veterans Week," said PVB Chairman Dr. Roberto de Ocampo, OBE. "These events, which challenge runners through gruesome and gritty courses, are our way of remembering, honoring, and emulating the bravery and sacrifices of our World War II veterans during one of the darkest chapters of our country's history."

Organizers are expecting about 4,000 participants for both events and as in previous years proceeds to be generated will be used for the restoration and upkeep of historical markers along the Bataan Death March route.

Last year's BFR and Freedom Trail proceeds amounting to Php 400,000 will be used for the construction of the historical marker in Mariveles, Bataan - Hospital 1.

The Veterans Bank Freedom Trail, also presented by PVB and organized by Without Limits, is also in partnership with DND, PVAO, Capas Freedom March, and the Provincial Governments of Bataan, Pampanga and Tarlac.