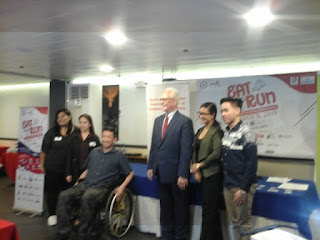 Entitled " 8th and Run " - the 8th AmCham Foundation ScholaRUN ", the title shows both a play of words of the "8th edition of the ScholaRUN and " Eat " as our new concept of " Eat and Run!" This new charity fun run concept will highlight Filipinos love for American food. Participating runners will get to taste several American favorites like burgers, pizza and doughnuts upon reaching the pit stop.

In partnership with Chevron Philippines and Emerson, " Eat and Run " concept is the first of its kind running event for charity in the Philippines which shows the vast influence of America on Philippine cuisine.

According to AmCham's Executive Director, Mr. Ebb Hinchliffe, the idea behind the Eat and Run concept was adopted in the United States. " We get better every year, so why not try something new, something different that has not been tried here before ", explains Mr. Hincliffe.

AmCham Foundation Philippines' President, Mr. Edwin Feist emphasizes this year's run for scholars will stand out from other runs.
"We want to make it interesting and exciting for the participants as this unique fun run concept also help fund our scholarship program," said Mr. Feist. The AmCham President adds that this activity is a major part of AmCham Foundation's fundraiser for underprivileged yet deserving scholars.

Mr. Feist believes that the young people of today are the future of tomorrow. Likewise, Mr. Hinchliffe remarks that education is a key to the future.

" That's why whenever you take a step, you know that you're just helping to give a book for a kid or help another kid go to school, " shares Mr. Hinchliffe.

Mr. Feist also shares that the foundation involves their scholars to participate in the running event. " Our scholars not only join the run but they are manning booths; they are a big part of the event. It's wonderful, " says Mr. Feist.

This new Eat and Run concept race categories are as follows; 200 meter dash,3k, 5k, and 10k. The event will start at 4 a. m. To join this first of its kind charity running event, visit www.goorahna.com or register at selected Chris Sports branches in SM Mall of Asia, SM North Edsa, SM Megamall, Glorietta, and at Market Market, BGC, Taguig City! Runners will receive a race shirt, racebib, finisher's medal and lootbag.