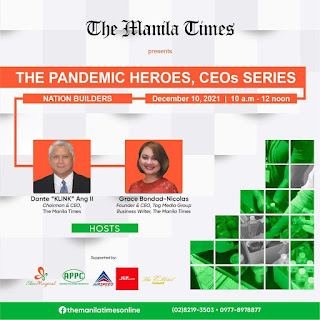 Engineer Grace Bondad Nicolas—the woman behind successful shows, marketing adviser to billionaires, and serial entrepreneur—recently added another feather in her cap by being elected Vice President for External Affairs by the Los Baños Chamber of Commerce & Industries (LBCCI).

As the co-founder as well as the face and energy behind her three flagship companies—AG Builders and Developers, TAG Media and Public Relations, and AAA Cosmetics and Trading Company—all registered in Los Baños, Laguna, the post is apt and well-deserved.

“It’s a pleasure to serve in Los Baños this time, my 3 companies are registered in this beautiful nature city and to contribute in the business sector under LBCCI is a plus point in what I usually do. I am excited to do more. ,” said Nicolas, a super-productive and tireless achiever in various fields and industries.

Board of Directors (in alphabetical order)

An indefatigable entrepreneurial mind, Nicolas through her brainchild TAG Media Group—and American Association of the Philippines’ Chairman’s Awardee for Communication—has produced and launched blockbuster concerts and events for the music and business industries.

She has produced the music industry’s ALIW@40 Concert and the Best of ALIW Concert in partnership with ALIW Awards, and recently launched Asia’s Best Singing Competition—Season 3 and Pandemic Heroes—CEOs Series online with The Manila Times, where she writes a regular column.

TAG Media’s signature event, however, is the annual Asia Leaders Awards, whose fourth-year recognitions were held at the Embassy of Singapore. The recognition body acknowledges leaders who continue to make a difference in the Philippines and beyond.

Despite wearing multiple hats for multiple organizations, Grace remains gorgeous as she is grounded.

She has took up her father’s legacy by founding and managing Laguna’s newest eco-tourism destination, Hidden Hills Farm by Josefino, named after her father who was also her inspiration and mentor.

“In this crisis, it’s your time to prove your worth and make a difference. Even while in lockdown, you can still do something productive and be of help to others by sharing your blessings,” she said, encouraging everyone to follow her lead.

Grace, who holds a BS in Industrial Engineering and took an MM in Engineering Management degrees from Colegio de San Juan de Letran, Certified in Marketing and Entrepreneurship in Asian Institute of Management and Ateneo is a devoted wife to Troy and mother to Andrea, Alexis, and Alexa. A proud daughter of Josefino and Remedios Bondad of Calauan, Laguna.