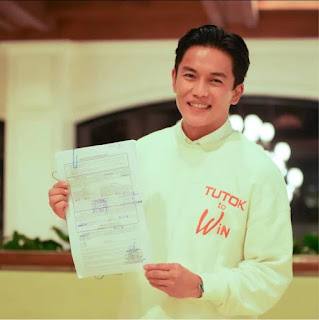 Sam Verzosa or SV is an Engineer turned Business Mogul and Philanthropist. He co-founded FRONTROW International in 2009 along with business partner Raymond “RS” Francisco when he was only 26 years old, making him the youngest founder of the biggest direct selling and MLM Company in ASIA. He runs several enterprises apart from FRONTROW, which include importation, real estate and quarrying businesses, as well as several famous night spots around the Metro.

Sam became part of Motostrada and Modena Motorsport in 2018, which owns the national distributorship of Ferrari and Maserati, and now stands as the President of Maserati and Executive Director of Ferrari in the Philippines.

Though Sam and RS are helping out more than a decade already since the start of Frontrow Enterprise, Sam would like to help out more.

Tutok to Win partylist filed their Certificate of Nomination and Acceptance (CONA) at the Harbor Garden Tent in Pasay City, last October 7, 2021. Sam Verzosa, Frontrow Philippines CEO, is the first nominee. Tutok to Win is number 140 in the ballot.

He is known for many charitable advocacy and fantastic activities of helping. Not just the indigents but beyond, now is the right time to do more. As he can help as many people as possible, if you give him a chance to win the party list slot Election this year with a slogan “Tutok sa pangangailangan, Tutok sa kinabukasan.”

Sam has co-founded FRONTROW CARES, the Corporate Social Responsibility arm of FRONTROW. This organization has extended its assistance to more than 100 charities, hospitals and institutions all over the Philippines, plus hundreds of thousands of Filipinos in times of crisis. The main focus of the foundation at this time of pandemic is its E-Skwela centers which provides local barangays facilities for online education.

Get to know more about the Tutok to Win Partylist. Only one Partylist to vote in your ballot.