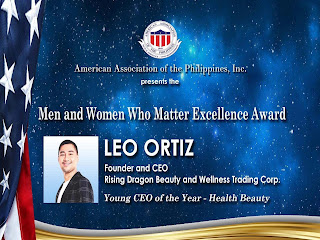 One organization, foreign as it may sound, is undoubtedly more Filipino by its heart and actions. Established primarily before for the welfare of Americans and Filipino Americans in the country, they proved to the world that they could do and give more.

AAP also give out recognitions to other organizations and individuals showing excellence on what they do and at the same time not forgetting to share blessings to other people through whatever means.

AAP just recently held a recognition event entitled “Men & Women who matter.” Giving citations and awards like this is a noble way of promoting excellence in leadership and inspiring like-minded capable leaders to do more than what they can in extending help to others not only this time of pandemic but as always.

It is indeed an honor for individuals in the Business to be part of their “Men and Women who matter.” The roster of awardees were:

Leo Ortiz with his billboards around Metro Manila and SLEX with his brand endorsers is truly making a difference in skincare nowadays with his successful product line and health drinks. Just in early 30s, Leo is one dynamic young leader who keeps on innovating with the new launch of different products even during this pandemic. He just received also at Embassy of Singapore an award under Asia Leaders Awards for his influence and contribution in giving jobs to the Filipino people.

Established in 1949,  AAP was founded on the concept of community interest, welfare and responsibility, the American Association of the Philippines (AAP).  It is composed of Americans, Filipino Americans, Filipinos and other nationalities  binded together by their common objective, establishing a whole host of beneficiary programs aimed not only to help the Americans and the Amerasians in the Philippines, but the Filipino people as well.

AAP do community missions focusing on the education and general welfare of those in deep need. They initiate cultural activities, fund-raising dinners, and social gatherings to further their objectives of helping out and Leo Ortiz, the young CEO always keeps on giving for the indigents and those in need.

To know more about AAP, their projects and initiatives, visit https://www.americanassociation.org.ph/