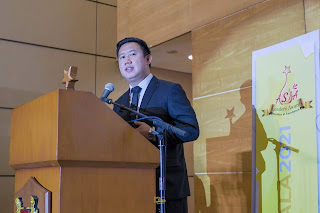 November 11, 2021, A mix of Business leaders and Public Servants were gathered together at the Embassy of Singapore in the Philippines for Asia Leaders Awards (ALA) 2021.  ALA is an avenue where exceptional leaders are recognized for their efforts in making their companies and organization shine. It also gives recognition to outstanding public servant who always puts the welfare of their constituents, the Filipino people in general, first and foremost.

Asia Leaders Awards put on the spotlight for the second time to this millennial mayor, who despite his young age and experience has made his hometown, the “Hidden Gem of the South.”  ALA 2021’s  Man of the Year for Public Service is no other than, Mayor Randy Salamat.

Mayor Salamat, the youngest Chief Executive Official in Cavite proved to his constituents and the entire Philippines that young blood may do better so long as armed with optimism, determination, and a clear vision to take on the lead. He has shown consistency on his kind of hands-on leadership

He has initiated many projects for his constituents, not only focusing on the development of infrastructure, policies, to help the seniors and constituents of his hometown, Alfonso, Cavite but also projects for the benefit of the children, in health care and education. Not forgetting the environment, he also took the forefront in combatting climate change by his green initiatives.

On the side, Mayor Randy is also a successful entrepreneur. Just recently, he was also cited by the AMerican Association of the Philippines as recipient of the Outstanding International Hospitality Entrepreneur award, because of his innovation and grit in launching different restaurants even during pandemic, thus giving jobs to more people who are in need and displaced by this global health crisis.

Congressman Michael Romero received the same award from ALA and as a nation builder. Other Business leaders who won Man of the Year on different categories were: Mr. Ronald Mascarinas of BAVI, Mr. Jonathan So and Mr. Carlito Macadangdang.

Asia Leaders Awards is the largest business awards event in the Philippines and Southeast Asia. It is only the recognition giving body whose awards committee is composed of respected leaders from different organizations and embassies. Its main objective is to promote the Philippines as a premier business hub and destination in Asia.