Inauguration of commemorative marker of inventions 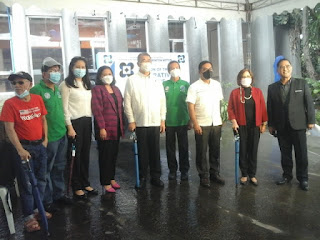 As a symbolic landmark in commemorating local inventors for their contributions to national development, the Department of Science and Technology (DOST) spearheaded the inauguration of the commemorative marker of inventions last  15 November 2021 at the facade of the Technology Application and Promotion Institute (DOST-TAPI).

“With the commemorative marker of inventions, we are reminded by the success of our collaborative efforts in the past, the continuation of these activities in the present, and the eventual domination of Filipino talents, technologies, and innovations in the very near future,” said DOST-TAPI Director Marion Ivy D. Decena.

The Department’s function through DOST-TAPI was expanded to administer the Invention Development Assistance Fund for the initial experiments, prototype development, and other invention-development activities in 1992.

Since then, invention-related development programs have been constantly reinventing and extending to inventors and assisting them in their innovative and entrepreneurial endeavors.

The role of invention and innovation, technology transfer, and technology commercialization to contribute for economic and social development play a crucial role as mentioned in the Philippine Development Plan (PDP) from 2017 to 2022 by the National Economic Development Authority (NEDA).

Secretary de la Peña added that Filipino inventors and innovators have matured and evolved perfectly along with the needs and signs of the times, transforming an idea endlessly into an enterprise of their own.

Organized by DOST-TAPI, the event has brought together inventors and their organizations, the media, and DOST Officials to witness the unveiling of the marker.

The commemorative marker also showcases the number of inventions assisted and a number of intellectual properties (IP) filed from 2010 to 2021.

At present, 84 inventions have been assisted by the Institute from concept prototyping, prototype development, to market testing, while 529 IPs have been granted and 161 IPs have been filed through the help of DOST-TAPI’s IP Rights Assistance Program (IPRAP).

In counting, a total of 774 assistance for IP protection and invention-related development activities have been performed by the Institute for inventors, researchers, and professional organizations including the academe.

IPRAP provides financial and technical assistance for inventions, utility models, industrial designs, and trademarks to have a successful filing before the IP Office of the Philippines.

The initiative by DOST-TAPI with the help of individual inventors and inventors organizations to build a commemorative marker of inventions is just the start of the renewed and strengthened relationship under the Institute’s new administration.

“While the science-based, inventive-centric solutions have been the hallmark of the Institute in opening discourse for milestones year after year, the commemorative marker of inventions solidifies and culminates our worthwhile activities,” concluded Dir. Decena.