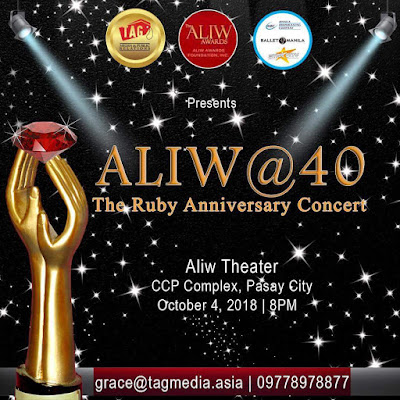 
On April 10, 2018 at UnliCity Restaurant,  Century City Mall, Makati. Aliw@40: The Ruby Anniversary Concert will be officially announced in a Press Conference. This year, Aliw Foundation will hold their biggest concert  as they celebrate their 40th Year Anniversary at Aliw Theater in partnership with various  companies under Liza Macuja Elizalde (Manila Broadcasting Company, Star City and Ballet Manila) among others.

Ms. Alice Reyes, a renowned Philippine journalist, Aliw Foundation and Aliw Awards founder is looking forward on this event and is excited to collaborate with the award winning musical director, Freddie Santos who will be in charge of Aliw@40. Ms. Reyes is also looking forward on the confirmations of the “Entertainer of the Year” awardees to join the concert. Further announcements will be made on April 10,  2018 Press Conference.

For this big anniversary concert, Tag Media will be the producer. They previously co-produced the 2016 Best of Aliw in Concert. According to its co-founder, Engr. Grace Bondad Nicolas, “We enjoyed the 2016 concert plus helping and acknowledging the best Filipino talents nationwide is one of our objective from the start. For us, it is promoting the Philippines which in turn could catch the attention of the international community, and likewise can help the country to getting more jobs and more tourist to come in the Philippines.”