“M. BUTTERFLY” NATIONAL TOUR 2019 ALL SET FOR SIX-CITY RUN FROM FEBRUARY TO JUNE 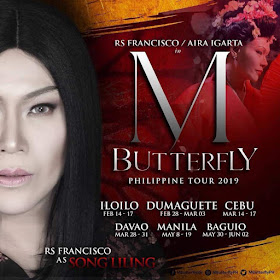 The M. BUTTERFLY National Tour 2019 is all set to spread its wings even wider to reach major cities namely Iloilo, Dumaguete, Cebu, Davao, Manila and Baguio.


Presented by Tony and Grammy award winning producer Jhett Tolentino and FRONTROW Entertainment (producer of highly-acclaimed independent films Bhoy Intsik and Bwaya), the M. BUTTERFLY National Tour 2019 was decided upon by the producers to bring this world-class masterpiece to those who did not have the opportunity to catch its 2018 Manila run. After all, location should not limit one’s exposure to the arts and culture.

Most theater companies in our country whose successful productions in Manila are often hindered from bringing their projects to other key cities because of the many challenges and technical details involved. And this is why Jhett Tolentino and FRONTROW Entertainment are taking this bolder step to carry on their mission and advocacy in the performing arts and to further enhance audience development throughout the Philippine archipelago.

This revival production of David Henry Hwang’s M. BUTTERFLY is the winner of the 2018 ALIW AWARDS for Best Play, Best Actor and Best Director. It was also nominated for two  Best Featured Actresses in a Play and Best Ensemble.

Synopsis: René Gallimard is a member of the French embassy in China. René is mild mannered and considers himself to be poor with women. He meets and falls in love with Chinese opera star Song Liling, a woman whom he considers to be the embodiment of the perfect woman, Madame Butterfly. But when West meets East, everything is not what it seems..

Targeting audiences between ages 18 and beyond, the producers are hoping that this classic drama, inspired by Giaccomo Puccini's opera Madame Butterfly’, will likewise resonate to theater audiences from Luzon, Visayas and Mindanao that “ love, power and deception holds no boundaries – whether this be in a rural or urban setting.”

RS FRANCISCO, the 2018 Aliw Awards Best Actor for M. Butterfly shall reprise his iconic portrayal of Song Liling, the Chinese opera singer who is Gallimard’s object of affection and seduces him through his biases of the East then exploits their intimacy to collect classified information for agents of the Chinese Communist Party.

​RS first essayed this role in May 1990 for Dulaang UP, opposite veteran actor, writer and critic Behn Cervantes. On its debut, M. Butterfly immediately rose to critical acclaim with packed houses and box office success in over 100 performances throughout the Philippines.

In the many years thereafter, RS Francisco’s theater credits in numerous productions and variety of roles continued to hone his craft as a compleat artist. In films, his most recent awards include the SINAG MAYNILA Best Actor, the STAR AWARDS Movie Actor of the Year and the SUBIC BAY INTERNATIONAL FILM FESTIVAL Best Actor.

When M. BUTTERFLY was revived recently on Broadway, RS had thought of bringing it to life once again to the new theater audiences of today. After all, this is the only ‘one’ role that continues to remain as closest to his heart.

To add a diverse twist to the M. Butterfly National Tour 2019, young actor AIRA IGARTA will step into the role of Song Liling as alternate in certain performances. As an original member of the Kurogo ensemble of the play’s 2018 Manila run, Aira is a stage and film actor from the Theatre Arts Program of UP Diliman where he took part in several Dulaang UP and Dulaang Labortoryo productions. Trained by the likes of Tony Fabella and Luther Perez, Aira was originally a dance and voice scholar at Quezon City Performing Arts Foundation (QCPADFI).

French actor OLIVIER BORTEN shall essay the role of Rene Gallimard, a former French diplomat, who relates the story of his passionate, disastrous affair with Song Liling from his cell in a Paris prison, where he is serving a long sentence for treason.

Philippine theater royalty JENINE DESIDERIO, who among many other theater, film, television and recording credits, assumed the lead role as Kim in the West End’s original Miss Saigon, will portray Gallimard’s wife – Helga. The pair married as a matter of convenience; Helga’s father had diplomatic connections that helped Gallimard ascend in his career. 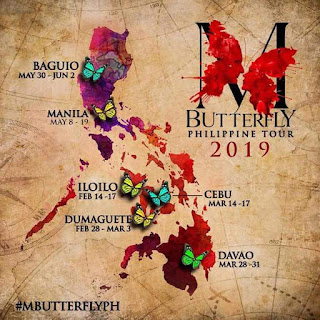